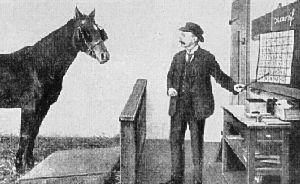 While one of the team wrote down the numbers and left the room, everyone else including the psychologist moved behind the blackboard. Of all of those left in the room, only the horse knew what was inscribed on the blackboard. Clever Hans failed every subsequent test. What the horse had been doing, proposed Pfungst, was to take questions either from his trainer or from other people in the room. Hans was able to spot very subtle movements such as a minute nod of the head and to detect the tension experienced by everyone in the room as he approached the correct answer.

Scientists since have discovered that horses (and dogs) can detect the heartbeat of someone standing nearby. As Clever Hans drew close to correct answer an increase in everyone’s heartbeat indicated the place for him to stop tapping his hoof.